How is molecular polarity related to solubility?

Why is this so?

When a solute dissolves in a solvent the individual particles of the solute separate from their neighbours and move between the spaces of the solvent particles.

Consider the process of dissolving a crystal of salt () in water.

A sodium crystal consists of an array of sodium ions (yellow) and chloride ions (green).

Water is a polar solvent: the end has a partial negative () charge, and the ends have charges.

This is an energy-releasing process.

Then, the positive and negative ends of the that are not surrounding the ions attract each other, holding everything together in a three dimensional H-bonding network.

The dissolves because you get back more energy from hydration of the and ions than it takes to remove the ions from the surface of the crystal.

What if you have a polar liquid such as ethanol, ?

The molecules of ethanol are attracted to each other by H-bonding.

And the molecules of water are attracted to each other by H-bonding.

If you gently add ethanol to water, you may get two layers, in which the less dense ethanol is on the top.

Water and ethanol are miscible in all proportions.

All it takes is a gentle swirl, and we have a homogeneous mixture (a solution) of the two substances.

What if you have a nonpolar substance such as hexane?

If we add hexane to water, the hexane will float on the top of the water with no apparent mixing.

The attractive forces among the hexane molecules are the relatively weak London dispersion forces.

The attractive forces among the water molecules are the relatively strong H-bonds.

The only attractive forces among the hexane and water molecules are London forces.

Similarly, a few water molecules will enter the hexane layer because of the water-hexane London forces.

Water and hexane are immiscible. They do not dissolve in each other.

Finally, will nonpolar substances such as hexane and pentane dissolve in each other?

The attractive forces among both the hexane and the pentane molecules are the relatively weak London dispersion forces.

There is little resistance to a molecule of one compound moving into the other layer.

When these properties are not significantly different in the solution than in the separate liquids, it is largely the natural tendency of a system towards increased disorder (greater entropy) that drives them into solution.

If solute and solvent have approximately the same polarity, they will probably form a solution.

What are the branches of chemistry and their definition?

The five major branches of chemistry are organic, inorganic, analytical, physical, and biochemistry. These divide into many sub-branches.

Organic chemistry involves the study of the structure, properties, and preparation of chemical compounds that consist primarily of carbon and hydrogen.

Organic chemistry overlaps with many areas including

Inorganic chemistry is the study of the properties and behaviour of inorganic compounds.

It covers all chemical compounds except organic compounds.

Inorganic chemists study things such as crystal structures, minerals, metals, catalysts, and most elements in the Periodic Table.

Branches of inorganic chemistry include:

Analytical chemistry involves the qualitative and quantitative determination of the chemical components of substances.

Physical Chemistry —the study of the effect of chemical structure on the physical properties of a substance.

Physical chemists typically study the rate of a chemical reaction, the interaction of molecules with radiation, and the calculation of structures and properties.

Sub-branches of physical chemistry include:

Biochemistry is the study of chemical reactions that take place in living things. It tries to explain them in chemical terms.

Thus, although there are FIVE main branches of chemistry, there are many sub-branches.

There is a huge overlap between Chemistry and Biology, Medicine, Physics, Geology, and many other disciplines.

Chemistry really is THE CENTRAL SCIENCE.

The wavelength decreases as the frequency increases.

The wavelength is the distance between successive peaks in a wave.

The frequency of a wave is the number of complete waves that pass a point in a given time.

Above we see two sound waves travelling through space at the same velocity .

The red dot follows the amplitude of the wave as it goes by.

You can see that the wavelength is halved when the frequency is doubled.

Since is constant, if increases, must decrease, and vice versa.

How do you calculate dilution factor?

You divide the final volume by the initial volume.

What is the dilution factor if you add a 0.1 mL aliquot of a specimen to 9.9 mL of diluent?

You have diluted the sample by a factor of 100.

The dilution factor is often used as the denominator of a fraction.

Pipet 2.00 mL of your stock solution into a 500 mL volumetric flask.

Add diluent to the mark on the flask (you will have added about 498 mL of water).

You now have a 1:250 dilution of your original solution.

Why is the maximum density of water at 4°C?

The maximum density of water occurs at 4 °C because, at this temperature two opposing effects are in balance.

In ice, the water molecules are in a crystal lattice that has a lot of empty space.

When the ice melts to liquid water, the structure collapses and the density of the liquid increases.

At temperatures well above freezing, the molecules move faster and get further apart. The density decreases as temperature increases.

At temperatures near 0 °C, the water still contains many ice-like clusters. These clusters are free to move relative to each other, so water is still liquid.

The clusters still have empty spaces, so they decrease the density of the liquid.

The molecules of the water are closer together, and this increases the density of the liquid.

As the temperature of warm water decreases, the water molecules slow down and the density increases.

At 4 °C, the clusters start forming.

The molecules are still slowing down and coming closer together, but the formation of clusters makes the molecules be further apart.

Cluster formation is the bigger effect, so the density starts to decrease.

Thus, the density of water is a maximum at 4 °C.

How can mixtures be separated using physical properties?

Here are some physical properties that you can use to separate mixtures.

Tea leaves do not dissolve in water, so you can use a strainer to filter them from your tea. Particles of sand and mud are denser than water. They will settle out over time. The process is sedimentation. Iron is magnetic. Steel isn't. You can use a magnet to separate iron filings from sulfur powder.

In chromatography, a mixture is dissolved in a liquid to make a solution. The solution is put on a solid material such as paper. The substances that are least attracted to the solid travel farthest along the paper. The separated substances form areas of colour. Here is a summary of the different methods that are used to separate mixtures. 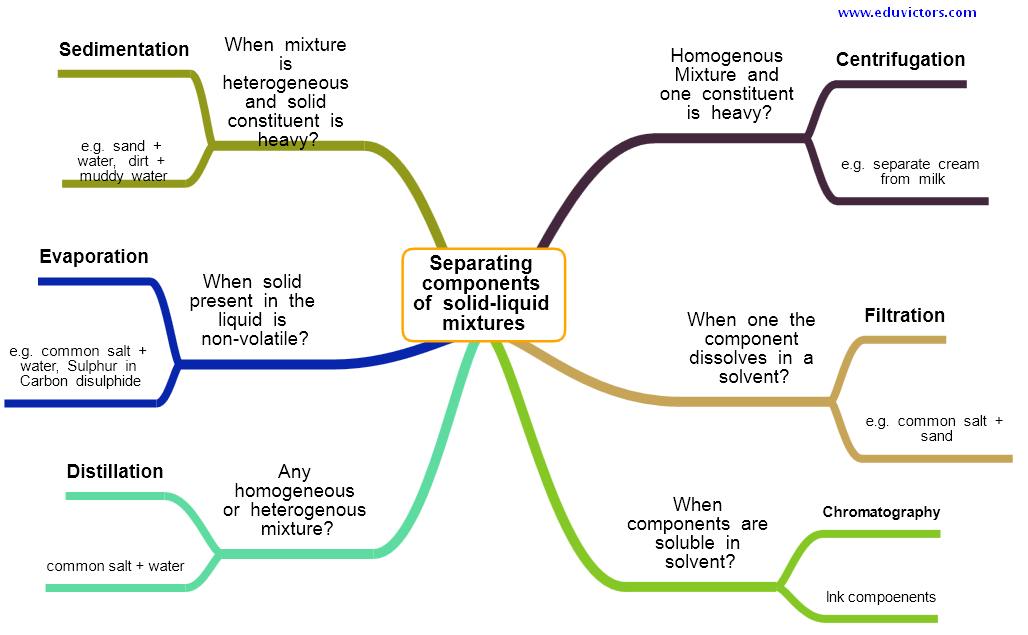 And here's a video that shows some of them in operation.

What is a supersaturated solution?

A statement to the effect that the.......... to define is a misinterpretation and would be rejected by an examiner.

I just saw this and I thought I should emphasize it, because an examiner would rightly reject this definition. Saturation describes an equilibrium condition, viz. that the solution contains the same amount of solute that would be in equilibrium with undissolved solute.

For a salt (or solute), , we describe the equilibrium reaction:

Now there is a solubility product, , and if the ion product , then the solution is with respect to .

If then the solution is with respect to .

And the solution is with respect to if . If you can remember how to frame these expressions, it will save you a lot of angst in an exam.

I reiterate that a statement to the effect that to define would be REJECTED OUTRIGHT by an examiner, in that a supersaturated solution manifestly contains more solute than a saturated one.

A thus contains an amount of solute than would be in equilibrium with undissolved solute.

A supersaturated solution may be formed by heating the solution with excess solute, and cooling very carefully. This metastable solution may be brought back to saturation (to equilibrium) by introducing a seed crystal or scratching the container with resultant precipitation of a mass of crystals from solution. This is the basis for many spectacular classroom demonstrations of supersaturation (usually with sodium thiosulfate).

i.e. If then the solution is . thus all refer to an equilibrium property

What is another name for an aldose that contains 6 carbons in its chemical formula?

A hexose, which is generically a sugar that had six carbons in its straight-chained form.

Simply put, "ose" is the suffix for a sugar, and "hex" is the prefix for six.

A hexose originally has 6 carbons as a straight-chained molecule, and after being put into water, it rapidly interconverts in an equilibrium between its straight-chained form and its cyclic form.

An aldose (sugar with an aldehyde group on one end) put into water forms a cyclic hemiacetal, heavily favoring its cyclic form usually.

When it forms a ring, it has 5 carbons in the ring, 1 oxygen in the ring, and 1 as a substituent on the ring (that's where the sixth carbon went; it's the terminal carbon).

, where is density, is mass, is volume

Solution
Rearrange the equation to isolate the mass and solve for mass.

The following diagram helps to understand how to manipulate the density equation so solve for any of the variables. 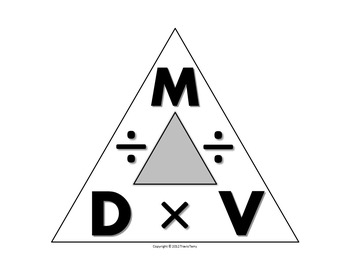 The important thing to do here is write a balanced chemical equation for this decomposition reaction.

Notice that you have a mole ratio between sodium bicarbonate and sodium carbonate. This means that the reaction will produce half as many moles of the latter than whatever number of moles of the former underwent decomposition.

Now, if the reaction were to have a yield, it would produce

This will be your reaction's theoretical yield, which tells you how much product you can expect when all the moles of the reactant actually form product.

Now, you know that the reaction produced , a little less than what you expected for a yield reaction. This is your actual yield.

Percent yield is defined as

In your case, the reaction had a percent yield of