What is the HOMO-LUMO gap and how does it change the properties of a substance? 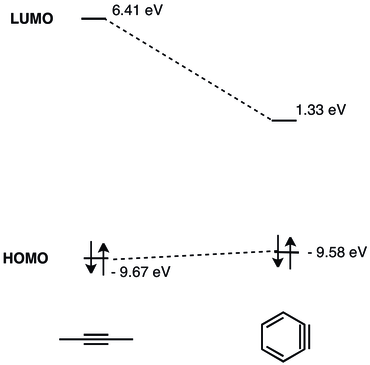 Due to the energies of these orbitals being the closest of any orbitals of different energy levels, the HOMO-LUMO gap is where the most likely excitations can occur.

Hence, it is the most important energy gap to consider.

Excitations becomes easier as the HOMO-LUMO gap converges, such as for large aromatic systems (like tetracene or benzo[a]pyrene), or for transition-metal complexes (that is why they tend to be colored).

The larger the aromatic system is, the smaller the HOMO-LUMO gap!

When you have a large aromatic system in particular, small HOMO-LUMO gaps lead to mobile electrons since it is easy for the electron to jump to a higher energy level that is close in energy.

The greater the mobility of the electrons in large conjugated pi orbital systems, the greater the distribution of the energy throughout the molecule, stabilizing it.

This mobility of the electrons further means that large aromatic systems (like graphene nanoribbons) have good conductivity and make great semiconductors since their conduction band gap is small; the movement of electrons is electrical current!