Yes, naphthalene is soluble in cyclohexane, and here's why that happens.

First, let's take a look at cyclohexane, or , which is a non-polar organic compound.

The difference between these two values (0.35) is considered to be too small to cause the bond to be polar. Non-polar bonds do not produce permanent dipole moments, which results in a non-polar molecule.

Naphthalene, or , is considered to be a non-polar molecule for the same exact reasons discussed earlier. 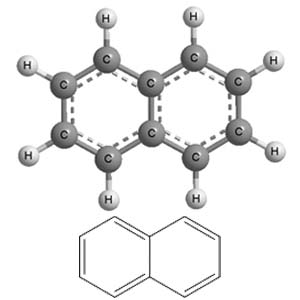 Again, the absence of polar bonds will result in a non-polar molecule.

Here's a link to another answer on naphthalene's solubility in various organic solvents:

8617 views around the world