I'll walk you through them one by one. 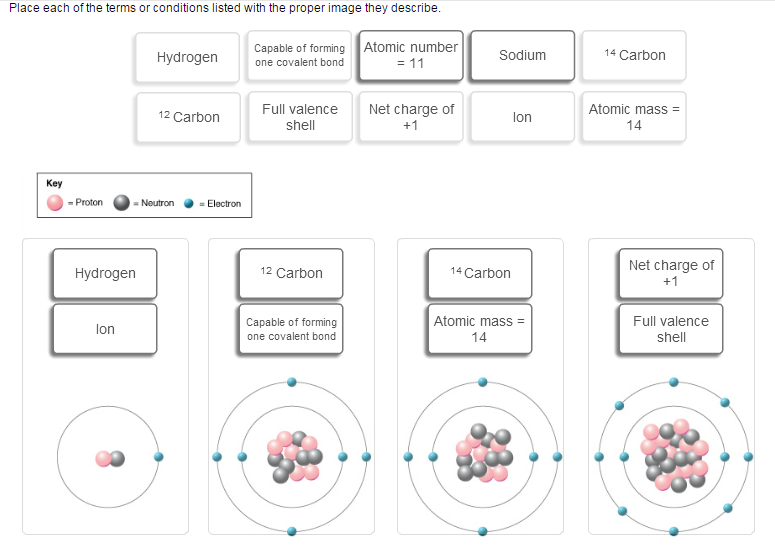 However, since it only has 1 electron, it can only form one covalent bond, since a covalent bond implies that each atom must contribute 1 electron to the bond.

You're partially right about the second one as well, it is carbon-12. However, you cannot say that it can only form 1 covalent bond, since it has 4 electrons in the outermost shell, i.e. 4 valence electrons, so it can form 4 covalent bonds.

The weird thing is that no other possibility exists for this one. It is not an ion, it doesn't have a full valence shell, it is not sodium, of course, and so on. So if you can, put just one option.

You are right about the third one, it is carbon-14 with an atomic mass of 14.

The fourth one cannot be the neutral atom sodium, despite the fact that it has an atomic number of 11. If you count the electrons around the nucleus, you'll see that there are 10 such electrons. Since you have an imbalance between electrons and protons, you'll have an ion.

Because you have 1 more proton than you have electrons, it will have a (+1) charge. The atom has a full valence shell as well, since it has 8 electrons in its outermost shell.

So the possibilities for the fourth one are atomic number = 11, ion, net charge of +1, and full valence shell.

3803 views around the world