You draw the molecule's Lewis structure and look for double or triple bonds.

You can find pi bonds in molecules that have

In order to see whether or not the phosphorus oxychloride , , molecule has one or more pi bonds, you need to draw its Lewis structure.

The molecule ahs a total of 32 valence electrons, 5 from phosphorus, 6 from oxygen, and 7 from each of the three chlorine atoms.

Phosphorus will be the molecule's central atom. Each of the three chlorine atoms will bond with the phosphorus atom via single bonds, which will account for 6 of the 34 valence electrons.

The chlkorine atoms will each have 3 lone pairs of electrons present, which will account for another 18 valence electrons.

Now for the bond between oxygen and phosphorus. At this point, you still need to account for 10 valence electrons.

A much more stable configuration is the one where the oxygen atom has 2 lone pairs of electrons present, and the bond between itself and the phosphorus atom is actually a double bond.

A double bond contains one sigma and one pi bond, so the phosphorus oxychloride molecule has a pi bond present. 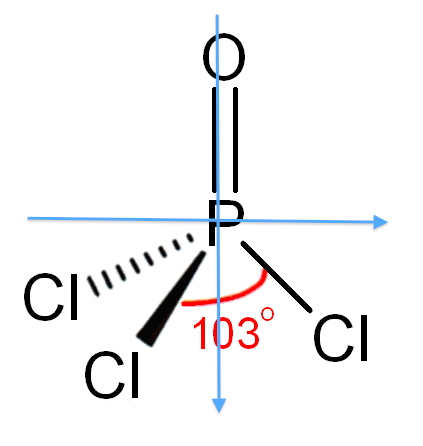 2962 views around the world