The carbon atoms are hybridized in the acetylene molecule.

Start by taking a look at the Lewis structure of acetylene, .

Now, in order to determine the hybridization of the two carbon atoms, you need to count the regions of electron density that surround each of those atoms.

The number os uch regions will give you the atom's steric number, which tells you what hybridization you're dealing with.

Take a look at the leftmost carbon atom (the process is the same for both anyway). Notice that it has no lone pairs of electrons attached, but that it does for bonds with two other atoms, a hydrogen and the other carbon.

This means that its steric number is equal to 2. The atom will thus use 2 hybrid orbitals to bond with the hydrogen and the other carbon atom, so it will be hybridized.

The and one of the orbitals will be used to make the two hybrid orbitals which carbon uses to form sigma bonds with hydrogen's 1s-orbital and the other carbon atom's hybridized orbital.

The remaining two unhybridized 2p-orbitals will be used to form two pi bonds between the two carbon atoms. 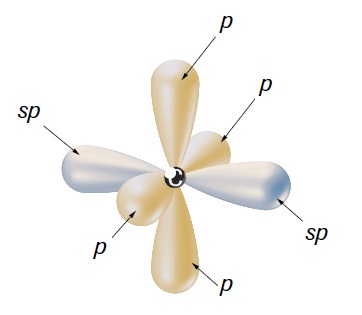