What type of hybridization does the central atom in #"SF"_4# have?

In sulfur tetrafluoride, the central atom is hybridized.

To determine the orbital hybridization of the sulfur atom, which is the central atom in sulfur tetrafluoride, start by darawing the molecule's Lewis structure.

The molecule will have a total of 34 valence electrons, 6 from sulfur, and 7 from each of the four fluorine atoms.

The sulfur atom will form single bonds with each of fluorine atoms. These bonds will account for 8 of the 34 valence electrons. Each fluorine atom will have 3 lone pairs of electrons in order to have a complete octet. 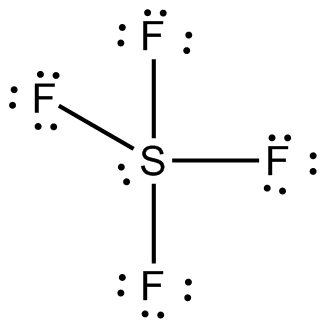 Now focus on the sulfur atom. Notice that it gets a total of 10 electrons, 8 from the bonds with fluorine and 2 from the lone pair. This is quite possible for sulfur because it has easy access to its 3d-orbitals, which means that it can expand its octet and accomodate more than 8 electrons.

In this case, sulfur forms 4 single bonds and has 1 lone pair, which means that its steric number, which is the name given to the number of regions of electron density, is equal to 5.

The central atom will thus be hybridized.