How do you write out the mechanism for the reaction of #"C"_5"H"_11"OH"# with hot sulfuric acid to determine which option gives the greatest number of isomeric alkenes?

Well, let's draw these out and see what they look like. 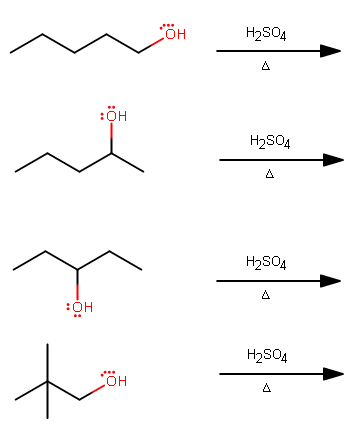 Based on what they look like, we can determine which products are possible. Let's write one mechanism for each one.

1) This alcohol is a primary alcohol, so there is only one possible dehydration product: the terminal alkene. The mechanism becomes: 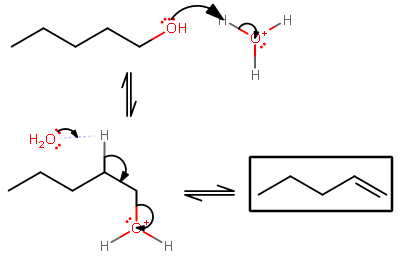 No other isomers are possible for this starting reactant. It doesn't matter how carbons 3-5 rotate their bonds; it's still the same compound. Also, the mechanism can occur as well. I just didn't draw it because it is shown in the fourth alcohol possibility.

2) For this secondary alcohol, the major product is formed according to Zaitsev's rule, which says that the -carbon with the fewest hydrogens donates the hydrogen to the base that performs the elimination. The mechanism becomes: 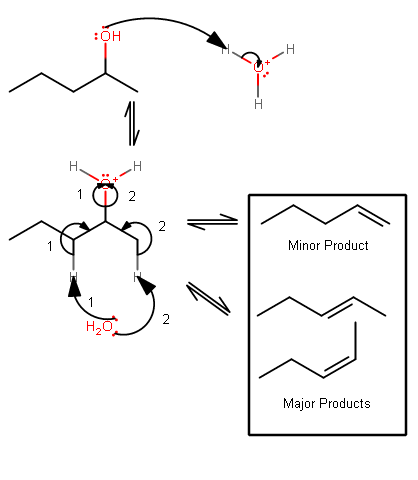 The major products include one cis and one trans isomer, while the minor product has no more than one isomer, being a terminal alkene. Also, the mechanism can occur as well. I just didn't draw it because it is shown in the fourth alcohol possibility.

3) This secondary alcohol is symmetrical, so there is no possibility of more than two alkenes: the cis and trans geometric isomers. The mechanism becomes: 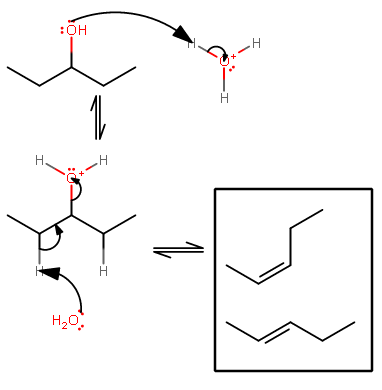 If you try eliminating the other -proton and then flip the product horizontally, it's the same molecule as the products drawn out in the mechanism directly above. Ergo, there are only two. Not three. Not four. Two. Also, the mechanism can occur as well. I just didn't draw it because it is shown in the fourth alcohol possibility.

DEHYDRATION OF TERTIARY ALCOHOLS MAY INVOLVE 1,2-ALKYL OR HYDRIDE SHIFTS 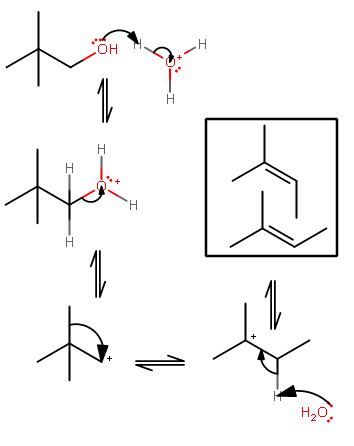 Once the leaves, there is no hydrogen to pluck off of the tertiary carbon, so the methyl group must shift (a 1,2-methyl shift) to the right in order to generate a more stable tertiary carbocation. As a result, this molecule is more likely to form a carbocation, and experiences more reactions than .

After the proton elimination, we have the E and Z geometric isomers of the final alkene.

Thus, we have overall: 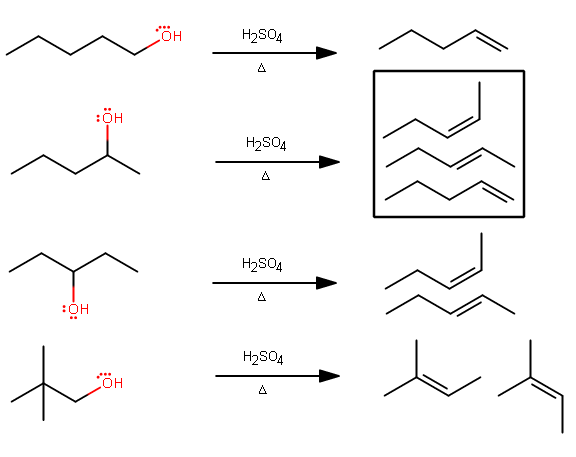 7757 views around the world