Before going into crystal field theory and ligand strength fields, it's worth taking a second to understand what paramagnetic and diamagnetic mean.

Now, I won't go into too much detail about crystal field theory in general, since I assume that you're familiar with it.

You know that is paramagnetic and that is diamagnetic, which means that you're going to have to determine why the former ion has unpaired electrons and the latter does not.

Both complex ions contain the cobalt(III) cation, , which has the following electron configuration

For an isolated cobalt(III) cation, all these five 3d-orbitals are degenerate. The thing to remember now is that the position of the ligand on the spectrochemical series will determine how these d-orbtals will split.

More specifically, you can say that 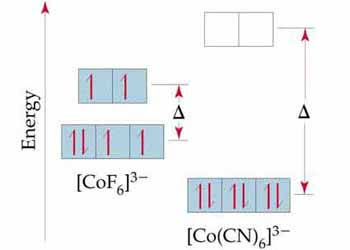 In the case of the hexafluorocobaltate(III) ion, the splitting energy is smaller than the electron pairing energy, and so it is energetically favorable to promote two electrons from the orbitals to the orbitals a high spin complex will be formed.

This will ensure that the hexafluorocobaltate(III) ion will have unpaired electrons, and thus be paramagnetic.

On the other hand, in the case of the hexacyanocobaltate(III) ion, the splitting energy is higher than the electron pairing energy, and so it is energetically favorable to pair up those four electrons in the orbitals a low spin complex is formed.

Since it has no unpaired electrons, the hexacyanocobaltate(III) ion will be diamagnetic.