First thing first, if you're dealing with the dibromobis(ethylenediamine) cobalt(III) complex ion, , then I'm not sure about the formula you have for the complex ion.

The charge of the chloride anion is , which means that you would either need two of these complex ions to balance it, or you have cobalt in the oxidation state, which is not very common at all.

I think you could get cobalt in its oxidation state by using fluoride anions, since they have a much better chance at being able to stabilize the charge on the cobalt cation.

So my guess is that you're either dealing with , or with , maybe?

Anyway, this doesn't actually matter for finding the coordination number of cobalt.

As you know, the coordination number of an atom is determined by counting the number of other atoms to which it is bonded. Remember, single, double, or triple bonds have the same significance here.

So, take a look at the dibromobis(ethylenediamine) cobalt(III) ion. The central cobalt atom is bonded to

Now, it's important to realize that ethylenediamine is a bidentate ligand, which means that it uses two donor atoms to bind to the central cobalt atom.

More specifically, these donor atoms are the two nitrogen atoms 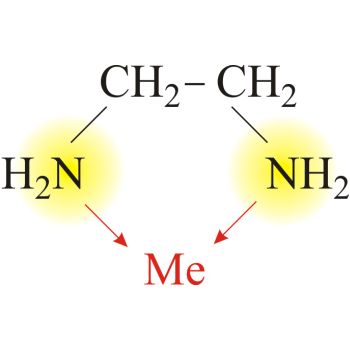 Therefore, the coordination number of cobalt in the complex ion is equal to .

The coordination number of in is 6.

Ethylenediamine is a bidentate ligand; it has 2 donor atoms to coordinate to the metal centre in a 5-membered chelate ring. Note that this (I presume) is a complex, i.e. configuration, whose formula is , not as quoted in your question.