As you know, is actually acetic acid, a weak acid that does not ionize completely in aqueous solution.

A more common chemical formula used for acetic acid is . I'll stick with this formula because it's easier to see the acidic proton in this version.

So, the fact that acetic acid is a weak acid means that when it reacts with water, most of the molecules of acid will remain unionized, i.e. they will not donate their acidic proton.

The molecules that do ionize will give up their acidic proton to form hydronium ions, , and the acetate anion, , which is the conjugate base of the acid.

The balanced chemical equation for this reaction will look like this

Now, the only difference between the complete ionic equation and the net ionic equation lies in the fact that the latter does not show spectator ions.

As you know, spectator ions are ions that are present on both sides of the equation. In your case, the complete ionic equation and the net ionic equation will be one and the same, since no ions can be found on the reactants' and on the products' side.

Moreover, the complete ionic and net ionic equations will be one and the same with the molecular equation, so once again

This equation represents the molecular, complete ionic, and net ionic equation for the dissociation of acetic acid in aqueous solution. 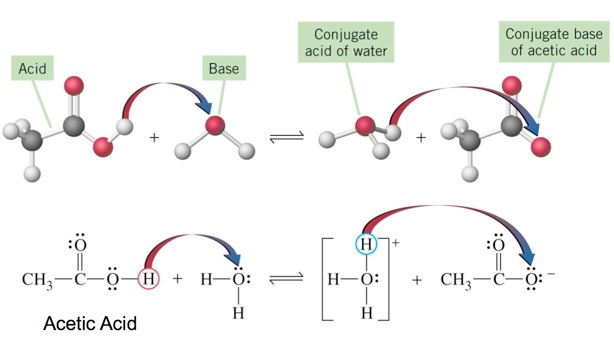 2150 views around the world