You are correct, a covalent bond is indeed formed when two atoms share electrons.

Although this is an oversimplification, the difference between covalent bonding and ionic bonding can be explained by the position of the bonding electrons.

When two atoms form a covalent bond, they share the bonding electrons. In simple terms, the electrons they share will spend equal amounts of time surrounding both atoms.

When two atoms form an ionic bond, they do not share the bonding electrons. What happens here is that one atom will take both electrons and develop an overall negative charge it becomes a cation.

The other atom will lose the electrons it contributed to the bond and develop an overall positive charge it becomes an anion. 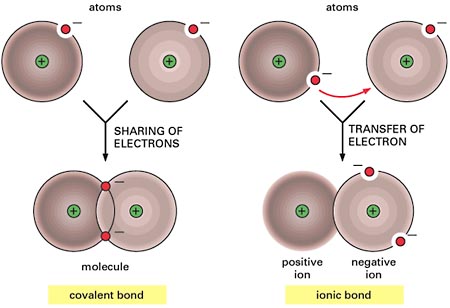 In your case, three out of the four options actually describe an ionic bond. Options and are equivalent, since they imply that one atom is losing electrons and the other is gaining them.

Option describes how the ionic bond actually works. Once these electrons have been transferred from one atom to the other, the cations and anion are formed.

Since opposite charges attract, the electrostatic force of attraction will then kick into high gear and pull these ions together an ionic bond is formed.