Because he didn't think that England and France would go to war if Poland were attacked by Germany.

There were many precedents that would raise a doubt as to if England and France would take serious action if Poland were attacked by Germany.

It didn't escaped to European bullies that the Invasion of Manchuria (September 1931) by Japan had been followed only by tepid reactions of the League of Nations.

The Invasion of Abyssinia by Italy, on December 1934, was also followed just by light sanctions that were soon abandoned. And the British and the French secretly agreed to concede two thirds of Abyssinia to Italy.

So, on March 1937, Hitler playing a gambit (because he had few men in arms) sent a few divisions to remilitarize Rhineland. That elicited only a few protests of France and almost no reaction of England.

On May 1937, after Stanley Baldwin retired, Neville Chamberlain took over as Prime Minister of Great Britain and conducted a policy of appeasement and also of rearmament.

Then Hitler insuflated Nazi groups in Austria and with aggressive tactics obtained the annexation (Anschluss) of Austria by the German Reich, on 12 March, 1938, The international community reaction was mild.

After that, by the pretext of defending German minorities in the Sudetenland, and negotiating, for instance, with Hungary to break up Czechoslovakia, Hitler prepared to go to war with this country but was prevented by Chamberlain who offered a negotiated solution that led to the Conference of Munich, September 1938 (Chamberlain later said that he got "peace for our time"). Czechoslovakia was partitioned among Germany, Poland, Hungary and the protectorate of Slovakia.

On March 1939 the Lithuanians surrendered Memel region to Germany (Hitler warned them not to deceive themselves by expecting some kind of help from abroad.

On May 1939 Italy and Germany signed the Pact of Steel.

Surprisingly, on August 1939 Germany and the Soviet Union signed a non aggression pact (Pact Ribbentrop-Molotov that also had clauses about a partition of Poland).

As to Poland, Hitler at first set the date of invasion to August 26, but postponed it to September 1, when the invasion of Poland by Germany began. It seems that Ribbentrop, the German Foreign Affairs Minister miscalculated the Western Powers reaction and gave a bad advice to Hitler that was already very self-confident. But this time the British called the hand of the German. 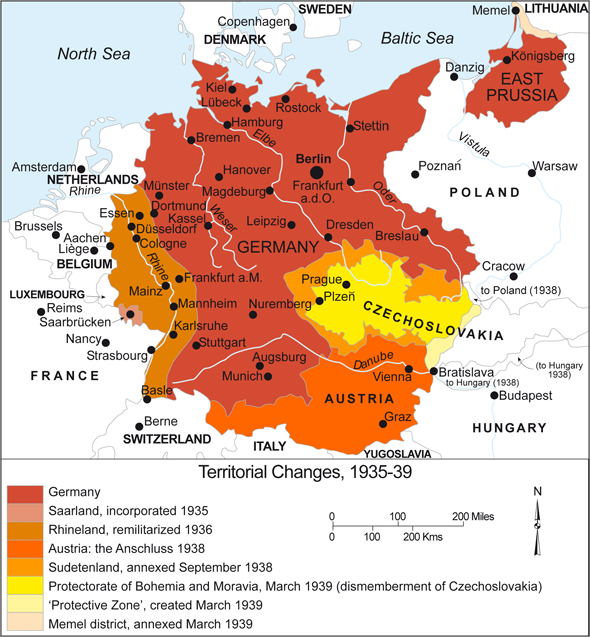 Besides the apparent opportunity to attack Poland unopposed, because of many reasons of economic and politic nature (see Explanation).

The first reason (the opportunity of grabbing Poland without an effective opposition) was developed in the first answer.

But Hitler himself exposed (in Mein Kampf, My Struggle) many reasons (or pretexts) for Germany to go to war.

He stated that the Aryans (the Germanic Races, for instance) were a strong race fated to submit the less strong races (the Slavonic Peoples, for instance) and to eliminate the decadent races (Jews, for example). By the way, Eugenics isn't a Hitlerist or Nazi invention.

It was a recurrent idea in the National Socialism that war is good to an Aryan people, when they can prove their valour and expel the decadent elements.

The humiliation of the German Nation represented by the Versailles Treaty was to be revenged by the defeat of the French Nation. Alsace-Lorraine should be taken back.

Hitler thought that a fast victorious war in the West, quickly defeating France, would lead to the isolation of Britain that eventually would be defeated or come to terms with the German Reich. And there were good prospects of this considering that the US intended to keep a policy of neutrality relatively to an European conflict. Anyway he had plans to massively fortify the Atlantic coast of an occupied-to-be France against a counterattack.

Hitler many times expounded on lebensraum (vital space) for the German people. It called for the expansion of the German State.

One of the measures that Hitler adopted, just after taking over as German Chancellor, on January 1933, to ease the high unemployment in Germany was to induce high levels of conscription in the armed forces that would supply the means for an aggressive foreign policy. The rearmament specially of the Army and of the Air Force (Luftwaffe) were also conducive to that. The German intervention/participation in the Spanish Civil War was a training for that.

The paranoia of Stalin led him to purge almost every one of the officials (above the rank of lieutenant) of the Red Army (only in the Far East Russia remained some). So this seemed a splendid opportunity to launch an attack on Russia. Besides, many nationalities, such as the Baltic States peoples would side with Germany against the Russians. And Russia meant the much needed oil for the German economy.

4886 views around the world