Let's focus on atoms for simplicity.

An OK analogy is when you have two bubbles floating in midair, and one of them flies into the other. This disturbs the equilibrium of the second bubble, and it starts jiggling.

If this second bubble then flies into a third bubble, that third bubble gets disturbed as well.

This analogy ties back into the idea of an atom weakly attracted to a nonpolar atom, approaching it, and disturbing its electron cloud after coming near it. This "jiggles" the electron cloud in the atom, polarizing it. 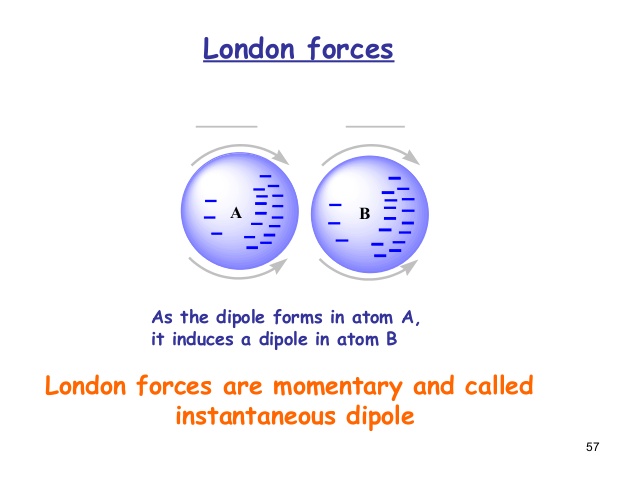 Now, the charge density is unevenly distributed in the atom.

AFTER DISTURBING THE ELECTRON CLOUD?

Now, the charge density is unevenly distributed in THAT atom as well.

(kind of like pool balls colliding in a chain reaction!)

This weak attraction that is temporarily-induced is a London dispersion force, an "intermolecular force" (or I guess "interatomic" in this case).

Larger atoms can get polarized more easily, because the electrons are farther away from the nucleus on average, experiencing less attraction to the positively-charged nucleus (therefore more freely-moving).

For instance, those forces are stronger for than .

2659 views around the world