The resulting isotope is chlorine-35.

Your goal here is to complete the nuclear equation given to you by using the fact that the radioactive nuclide undergoes a beta minus decay.

As you know, when a beta minus decay, more commonly called beta decay, a neutron located inside the nucleus of a radioactive nuclide is being converted to a proton.

At the same time, an electron, also called beta particle, and an electron antineutrino are being emitted from the nucleus. 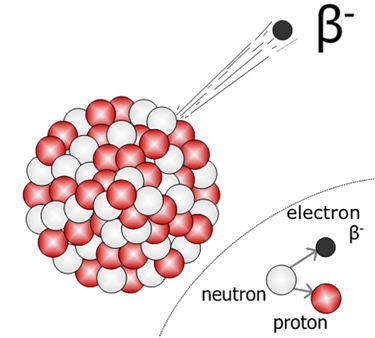 Now, in a nuclear reaction, mass and charge are conserved. This means that you will have

You can thus say that

Grab a Peridoc Table and look for the element that has an atomic number, i.e. , equal to . You'll find that you're dealing with chlorine, .

The resulting isotope is chlorine-35, which means that the balanced nuclear equation that describes the beta minus decay of sulfur-35 looks like this

3665 views around the world