Chromatography would show that a sample of orange juice contains (at least) two yellow dyes.

To separate the dyes in orange juice, TLC would most likely be used. A diagram is shown below. Basically, the orange juice would be placed at the pencil line (origin line) and the solvent (most likely water, called the mobile phase) would move by capillary action up the stationary phase (the chromatography plate) and the orange juice would separate into dyes based upon the particular dyes attraction to either the stationary or mobile phase. 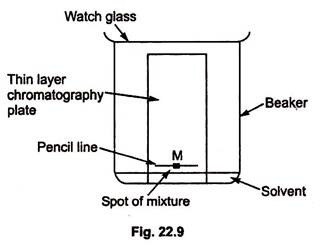