When the DNA template is transcribed to produce RNA, bases will pair with their complementary partners as in DNA. In a double stranded DNA molecule A pairs with T and G pairs with C. The rule to remember for transcription is that RNA molecules will contain U's instead of T's.

The process of translation occurs when a ribosome "reads" the sequence of the mRNA to build a protein molecule consisting of a chain of amino acids. The ribosome reads the RNA according to chart below. A set of three letters that indicate a specific amino acid is called a codon. 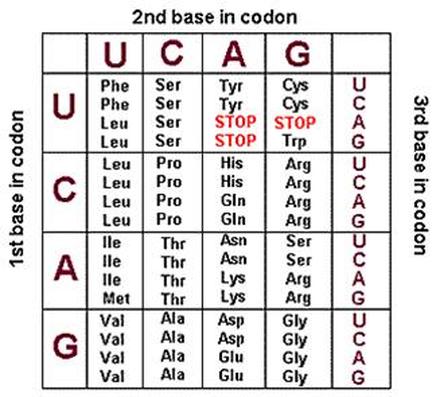 The RNA is read three bases (letters) at a time. The final codon of the sequence you provided was missing the third letter, but the redundancy of the genetic code would mean that this codon would cause the amino acid alanine (Ala) to be inserted no matter which letter is in the third position of the third codon.

You might find this video to be a nice additional source of information on this topic.

3797 views around the world