What is the medical terminology for blind spot of eye?

Blind spot is also known as optic disc. It's a point where optic nerve enters the eye ball and the corresponding region of retina contains no pigment cells as a result no image is formed at that point.

It's name is optic disc because at its entry point optic nerve causes a bit cupping of the eye ball.This degree of cupping is fixed as more cupping indicates increased CSF pressure in brain which leads to papilloedema, which can be seen by an ophthalmologist using fundoscopy (fundus is the posterior part of eye ball). 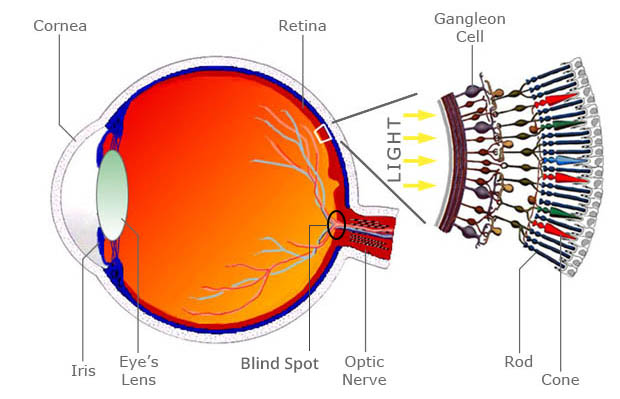 punctum caecum is the word used.

A blind spot is a place where there are not photo receptor cells, meaning you cannot detect light and therefore 'see' there.

This relates some what to field of view, such as for us, due to where our eyes are situated, our blind spot is anything past the back of the corners of your eyes and behind you.
Animals such as hoofed animals or fowl, which are most commonly animals which are preyed on, have their eyes situated on the sides of their head, giving them a much better range of view, and a range of view which extends slightly behind them, allowing them to see any approaching predators from any angle.

However, due to this, most of these creatures have no 3D vision or depth of field, and more often than not, only one of their eyes can see what they're looking at and produces a '2D image'.
However, this depth of field is quite necessary usually when you'd rather see what is around you whilst your head is in the grass eating whatever is your fancy.

Animals which have eyes situated 'pointing' out of the front of their skulls are usually predators, or have another meaningful use to them. This therefore produces a 3D image in a certain zone in front of them, this field of view helps them in hunting, as it allows them to do the internal calculations of their pounce, jump, etc. So they get to their destination, whether that be on the next branch of fruit for a black-and-white colobus monkey or the unsuspecting prey of a serval cat.

There is however animals who also break out of this field of view, such as the Chameleon.
Chameleons have almost no blind spot, apart from where their independent eyes at the time are not looking, and uses their eyes to seek out prey, mates and to watch for predators.
When they find food however, they line both of their eyes up, unsurprisingly for the 3D depth of view it produces for them, which is necessary for the hopefully accurate hit of their tongue on their target prey.

Animals such as Eagles and Falcons (most bird of prey though these in particularly), have a zone where they can also produce a magnified image, which helps in searching for prey, as well as tracking them when stooping/attacking.

Hopefully this helps, and the extra info.

5277 views around the world