It is caused by the movement of convection currents in the (liquid) outer core.

It is well known that the Earth has a liquid outer core and a solid inner core from studying the motion of seismic waves through the Earth. The decay of radioactive elements provides the heat source that causes the convection currents to arise.

The situation is (fiendishly) complex as the movement of the currents is constrained by the spherical inner core and subject to the Coriolis force. As a result of these multiple rotations in different planes the convection exists as 3D “rolls” of material, but the effect is the same.

A diagram and a link compete my contribution (and mark the limit of my understanding!) 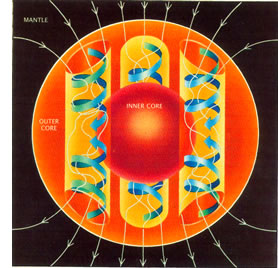 Try this too, but it isn’t simple!

273 views around the world