Polyploidy is used in genetics and is defined as an organism or cell having more than twice the haploid number of chromosomes.

Rarely is this seen in animals but it is common in plants. It is seen in some animal tissues such as muscle and red marrow.

Most organisms are diploid. If an organism is polyploidy, it is due to an abnormal division of the cell. It is seen in salmon or goldfish but mostly in plants.

It can occur in about 2–3 of all human pregnancies and ~15% of miscarriages. 85% never get beyond the first few cell divisions.

Most wheat types are polyploidy. Durum (macaroni wheat) has four sets of chromosomes while bread wheat has six sets. 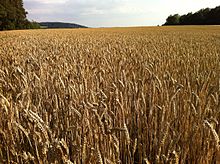 Seedless watermelon and bananas have three sets and strawberries have ten sets.

Polyploidy refers to those cells and organisms that contain more than two paired sets of chromosomes.

Polyploidy refers to a numerical change in a whole set of chromosomes.
It may occur due to abnormal cell division, either during mitosis, or commonly during metaphase I in meiosis.

Polyploidy is found in some organisms and is especially common in plants. It occurs in the somatic cells of some animals such as goldfish, salmon and salamanders. It also occurs in highly differentiated human tissues in the liver, heart muscles, and bone marrow.
Polyploidy is very common among ferns and flowering plants e.g. wheat and several plants of the genus Brassica.

4236 views around the world