Can someone please thoroughly explain titrations and their graphs? Thank you!

This is useful because, if you had HCl with an unknown concentration, it can either scar you for life when you touch it, or irritate you for a while. To be safe, we can use titration to determine its concentration.

Take the titration curve for added to acetic acid as an example: 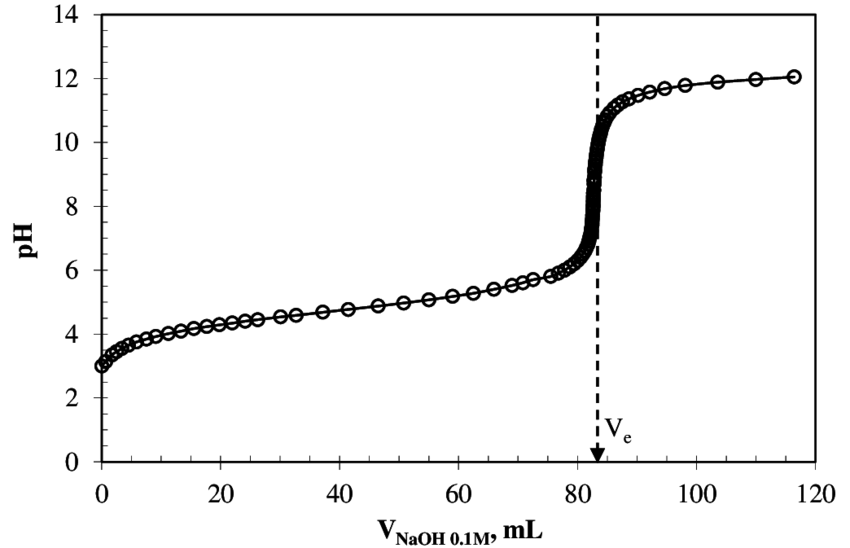 The rest of this answer will assume strong base is added to weak acid. However, strong acid could just as easily be added to weak base, and the above graph would be flipped horizontally.

Let's say you know what your acid is already. Then the point of a titration is to:

That is done by knowing the mass you used to make your acid solution, so that you can calculate its starting concentration with a good amount of certainty.

If you do NOT know what your acid is, then the titration is done to determine its and thus, possibly its identity.

The side of the graph before the steep rise is the buffer region. It is where your weak acid, while being neutralized, is in the presence of its conjugate weak base (which is being produced as the weak acid is being neutralized).

It is here that the Henderson-Hasselbalch equation can be used.

The equivalence point is the spot indicated on the graph by , the volume used to reach it. It is where a steep rise in the occurs, which is called an inflection point. This volume is the volume of titrant (e.g. from a burette) you added in order to neutralize all of the substance being titrated exactly.

(That is, it is the volume of titrant that contains the exact number of mols you need to react with all of what you are titrating.)

Once you make it past here, you're at a part of the titration where you have only the weak conjugate base and any extra you add. Thus, the becomes higher than , and peaks off at the of your .

In other words, it is at . On the above graph, it's at about , and it is in the buffer region. It is where the since the concentration of weak acid and its conjugate weak base are equal:

Of course, the Henderson-Hasselbalch equation only works in the BUFFER REGION... at the equivalence point, the logarithm tends to infinity... , and thus, .

6510 views around the world