Could someone explain the lewis structure diagram of covalent compound Al2Cl6?

Here's what we have to know for school but I don't know how it works. What do the arrows mean?

Chlorine has 17 electrons, but 10 of those are in the orbitals of the lower energy levels. ( orbitals).

These are completely enveloped by the larger -orbital (think of a golfball inside a tennisball) so takes no part in the formation of bonds.

The other seven are distributed in the and the three -orbitals, but upon forming (Covalent) bonds these orbitals hybridise into -orbitals
for more info about Hybridisation, here's a good link:

In our case the - and three -orbitals will hybridise into -orbitals.: 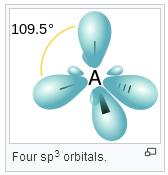 Each orbital can contain, and indeed strives to contain, 2 electrons ().

Chlorine thus has 7 electrons in the 4 -orbitals: 3 orbitals are filled with 2 each, the fourth has only one. If you look the the picture below (that I copied from Above) you will see 6 electrons paired in 3 "filled orbitals"

The fourth one, the one that contains the single, unpaired , joins in the fourth -orbital with one from the Al-atom (the one on the right). So in this bond between the Al-atom and the Cl-atom, each donates a single electron. That's why the bond is represented by a straight line.

Aluminium has only 3 electrons: 2 in the and one in one of the -orbitals. However, upon hybridisation these 3 electrons are spread over 4 -orbitals. Like in the one mentioned above, the other two cooperate as well in the formation of covalent bonds with 2 Chlorine atoms These are circled in Green: 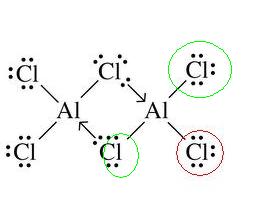 Chlorine has a rather high Electronegativity, which means that it pulls rather hard at electrons from other atoms (from each other, and from other elements.

It is a tug-of-war that the Aluminium atom is threatening to lose, leaving it rather (positive).

At the same time, the Chlorine atoms are satisfied in their hunger for electrons, in fact they don't want any more because they have a full set of 8!
Because of this "diminished appetite" on the side of the Chlorine atoms, and the increased hunger on the part of the Aluminium atom, The bond is formed by BOTH of the Chlorine electrons.
This is the explanation for the arrow circled by Aqua: 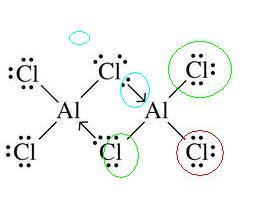 In , this happens twice but I'm sure you can spot the other one by now?

PS: By the way, it is covalent because the bonds are created by sharing of electrons between the two atoms.

8941 views around the world