Do galaxies orbit other objects in space?

Amazingly, it is thought that at the centre of (almost) every galaxy, there is a Supermassive Black Hole - a huge body with so much mass and gravity that not even light can escape being pulled in.

In the area closest to the Black Hole, the stars are flung around in an erratic orbit at very high speeds and the entire region is very energetic as stars on near the event horizon are ripped apart while others speed round. Very exciting! 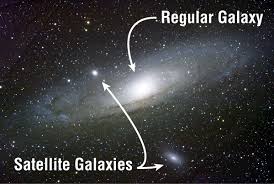 Some smaller galaxies, known as "Satellite Galaxies", orbit bigger
galaxies due to being attracted by the bigger galaxy's gravity. Our own galaxy, the Milky Way, has a few of these!

Galaxies can also form in clusters where they orbit around a shared point of mass.

The cool (or annoying) thing is, we still don't know for sure. Even with black holes at the centre, it doesn't seem that there is enough mass to keep a galaxy rotating - so what's driving it? Maybe it's some force from the beginning of the universe or a completely new kind of force. We just don't know.... YET!

I hope this helps; let me know if I can do anything else for you:)

563 views around the world