Does Li or F have the larger atomic radius?

Start by taking a look at a periodic table and making a note of where lithium, , and fluorine, , are located.

This means that you can use your knowledge of the basic atomic structure to determine which atom will have the larger atomic radius.

So, you know that atomic number, which represents the number of protons that can be found in the nucleus of an atom, increases as you move from left to right across a period.

Now, an atom's size is actually determined by how far away from the nucleus its outermost electrons are located.

Atoms that share a period have one important thing in common - their outermost electrons are located on the second energy level.

Here is where the number of protons that each atom has in its nucleus becomes important.

Since outermost electrons are located on the same energy level in both the lithium and the fluorine atoms, it follows that the nucleus that has more protons will attract these electrons more - this is known as effective nuclear charge.

As a result, the atomic size of fluorine will be smaller than that of lithium, or, in other words, lithium will have larger atomic radius than fluorine. 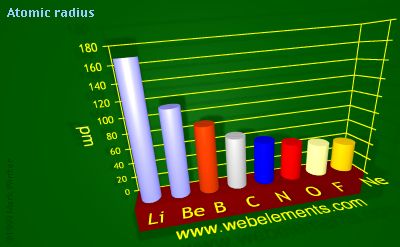