Elemental iodine is a solid at room temperature. What is the major attractive force that exists among different I2 molecules in the solid?

Iodine exists as a diaatomic molecule, , which is formed when two iodine atoms form a covalent bond.

An important implication of the fact that the bonding electrons are being share equally, which is implied by the covalent bonding that exists between the atoms, is the fact that the iodine molecule is nonpolar.

As a result, the only intermolecular forces of attraction that exist between iodine molecules are relatively weak London dispersion forces.

More massive molecules have larger electron clouds, something that has a direct impact on the strength of the London dispersion forces.

London dispersion forces arise when random instantenous variations appear in the distribution of a moelcule's electron cloud. These variations give birth to partial positive and partial negative charges on opposite sides of the molecule - instantaneous dipoles.

In turn, these partial charges can polarize a neighbouring molecule by inducing a similar charge separation in that molecule's electron cloud.

Here's how that would look for three helium molecules

So, as a conclusion, the only forces that exist between iodine molecules are relatively weak London dispersion forces. 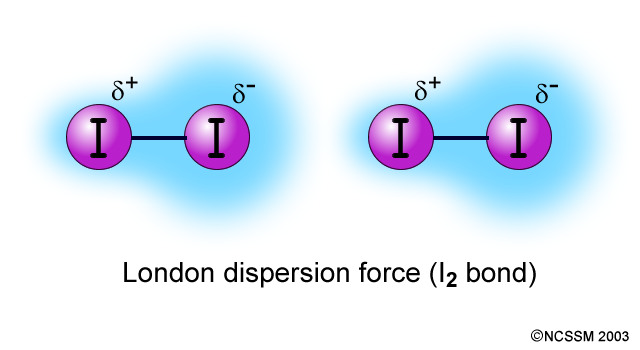 Iodine exists as a solid at room temperature because the strength of these forces are in line with iodine's large electron cloud and polarizability.