How can uranium-238 decay to plutonium-239 but its mass still increases? 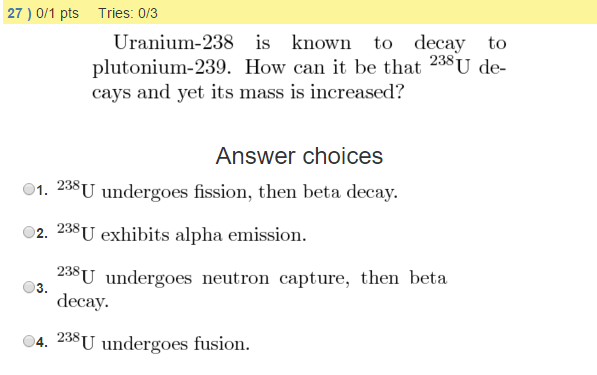 The trick here is to realize that the two nuclides have equal mass numbers.

As you know, uranium has an atomic number equal to . This implies that the uranium-238 isotope has a total of

neutrons inside its nucleus. Plutonium, on the other hand, has an atomic number equal to , which of course implies that the plutonium-239 isotope has a total of

When uranium-238 captures a neutron, it forms uranium-239

Now, when a nuclide decays via beta decay, or beta minus decay, a neutron located inside the nucleus is converted to a proton and an electron, , and an electron antineutrino, , are emitted.

This will change the atomic number of the nuclide, but leave its mass number, which is the number of protons and neutrons located inside the nucleus, unchanged.

The first beta decay will get you

Uranium-239 will decay to neptunium-239 by way of beta decay. The second beta decay will get you

As you can see, one neutron is being lost with every beta decay, but because it is being replaced by a proton, the mass number remains unchanged.