How did the "pi" bond help to explain the resonance in ozone?

Also recall that a pi bond is an overlap of unhybridized p-orbitals as shown in the sp3 carbons in the image provided. 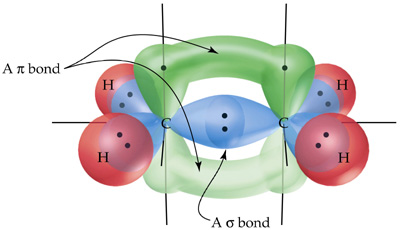 Now, pi bonds are high energy and have a dispersed electron density making them weaker.

Note the difference between the two major resonance forms of ozone. The position of the double bond has changed as well as the formal charge on the terminal .

Since pi bonds are higher energy than sigma bonds, they are more easily broken and may re-form elsewhere on the molecule. This movement of electrons between each resonance structure helps to delocalize any formal charges. The more resonance forms a structure has, the more stable the compound.

There are more valid resonance forms for than the ones that I showed, but they either don't have an octet on all atoms or have too many formal charges and are unimportant.

4085 views around the world