How do bacteria differ from a virus?

The biggest difference between these two groups is that bacteria are considered living things and are made of cells, whereas viruses are not (and aren't made of cells).

Expanding on that, bacteria are unicellular organisms belonging to the domain Eubacteria but now called Bacteria and Archaea ,

They are ubiquitous on Earth and while they often have a bad reputation for causing disease, many are harmless to humans and some are very helpful to us (for example, the E. coli in your gut helps you digest food).

Viruses, on the other hand, are not in the organism classification scheme as they are not considered living things. They are not made of cells like organisms, instead they are generally composed of a protein coat surrounding genetic material (DNA or RNA). They do not respire the way organisms do, nor can they reproduce independently. Some have a lipid coat while others do not.

Here are a few other differences:

Here is an image that helps compare the structure of the two (note that it is not to scale- the virus should be much smaller): 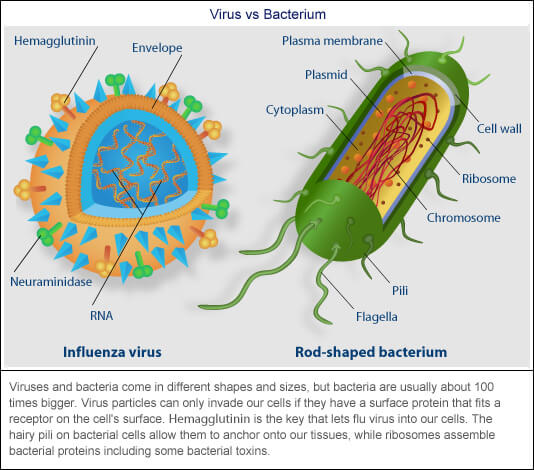 See all questions in Bacteria