How do ions cross the lipid bilayer?

Ions can cross the lipid bilayer because proteins in the membrane create pores that help ions pass through.

In passive transport, transmembrane proteins create a water-filled pore through which ions can pass by diffusion down a concentration gradient.

This is simple diffusion and requires no energy.

Channel proteins are more than just holes in the membrane, as they exhibit specificity and allow only certain ions to go through. In active transport, specific carrier proteins use the energy of ATP to force ions through the membrane against a concentration gradient.

They physically carry ions from one side of the membrane to the other via conformational changes.

For example, the pump exchanges for .

The proteins are called ion pumps, because they use the energy from ATP hydrolysis to change their shapes and "pump" ions from one side to the other.

One ion may be transported down the concentration gradient, providing the energy needed to transport a second ion against the gradient.

For example, the sodium-calcium channel moves three sodium ions in one direction for each calcium ion that moves in the other direction. 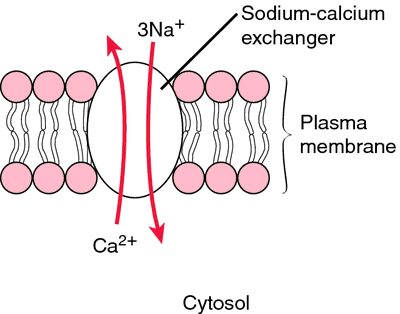 9705 views around the world