How do phospholipids arrange themselves into a bilayer?

The charges present on a phospholipid molecule dictate it's orientation when placed in an aqueous solution.

Water makes up for ~50-60% of the adult human body. It is present in all tissues, and is an important medium for which most biochemical processes occur. With this information in mind, we can discuss how phospholipids interact in water, and thus conclude how a phospholipid bilayer is formed.

Phospholipids are a class of organic molecules with a hydrophilic head consisting of a phosphate group, which is connected by a glycerol molecule to two long fatty-acid chains that are hydrophobic. They form the cell membrane of human cells.

Before I continue, I'd like to point out the two unusual words used above, and look at their roots.

They both have the prefix, hydro-, which is a Greek word meaning water.

That leaves us with the two suffixes, -philic and -phobic, which are again, Greek in origin, and are in a sense, opposites.

-philic pertains to attraction. For example, I am from Britain, but now live in the U.S. and I find that many people here are Anglo-philes ; that is, they love English people - or more likely, they love my accent.

-phobia pertains to fear. Not everybody in the U.S. understands British people, and so treat me with a certain level of disdain. I deem those people to be Anglo-phobic.

How do molecules know what they like and what they fear? Well...they don't. It's just that the hydrophilic head carries a charge, which causes it to be polar, and as such, will interact with water molecules (which are also polar). The hydrophobic tails however, don't carry any charge, which causes them to be non-polar, thus, they will not interact with water molecules.

You've seen oil in water before? It sticks together, and floats on the surface, until it all just forms one big slick. If you shake the mixture vigorously however, you see thousands of tiny little globules floating on the surface which will eventually return to one big glob. This is due to forces between the water molecules and the oil molecules and is known as the 'hydrophobic effect'.

In the human body, water is present in almost every space you can imagine. When exposed to the water, the phospholipid bilayer spontaneously self-assembles. 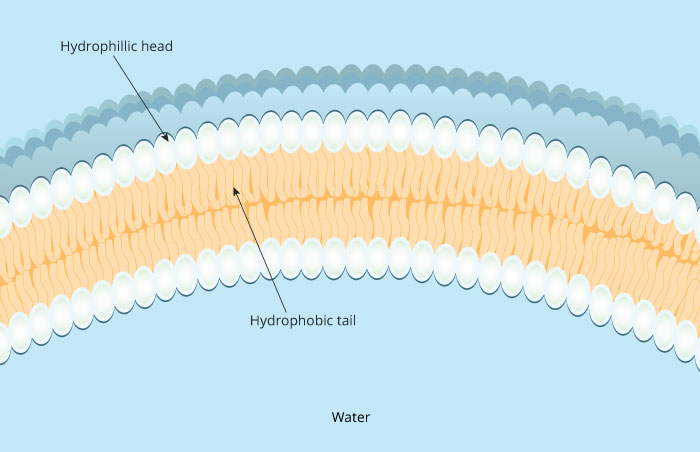 If you can picture it, the hydrophilic heads begin to arrange themselves in such a manner that they are directly exposed to the water molecules, and the exposed tails attempt to isolate themselves from the water; leading to the creation of a sphere with the heads exposed, and the tails safe from water on the inside. As more spheres are created, they interact with each other and combine to create a larger, continuous phospholipid bilayer.