How do voltaic cells work?

In a voltaic cell, we utilize one chemical that has a tendency to oxidize - lose electrons - and a second chemical that will reduce - gain electrons.

Any of a large number of materials can serve as these electrodes. Each electrode brings with it a characteristic contribution to the cell voltage known as the half-cell potential.

The voltage of the cell is the difference between these two half-cell potentials.

The diagram below shows the cell consisting of Zn and Cu electrodes, which is commonly the first one students encounter in Chemistry classes. It is typical of the manner in which most cells work. 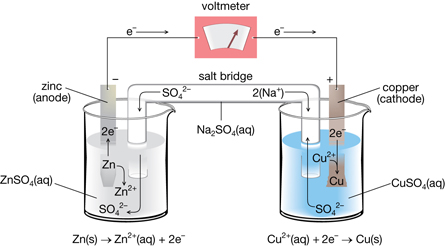 At the anode, zinc metal oxidizes into zinc ions by releasing two electrons. The electrons follow a path through the external wires where a voltmeter measures the energy possessed by the charges. Finally, they arrive at the copper cathode, where they cover the outer surface of the metal.

Here, the electrons combine with copper ions to produce copper metal, and the electrons are removed from the system (that is, they do not flow through the solution back to the anode).

The voltage of the cell (at 1 M concentration and 25°C) is 1.10 V. This value is characteristic of the metal and metal ion pairs used in each beaker, or "half-cell". Choice of different metals will cause the voltage to be different.

7763 views around the world