How do you name benzene derivatives?

You could mean phenyl groups, or benzyl groups. 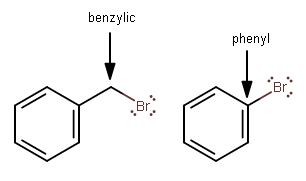 The compound on the left is benzyl bromide, and the one on the right is phenyl bromide.

This way of naming it simply uses the name of the functional group, and treats the element attached to the phenyl/benzylic carbon as if it were an anion. Hence, benzyl/phenyl bromide.

Another way you could name this is to use the attached element as a substituent and use the bromo- prefix. Then you would use "benzene" as the parent compound.

Since a one-carbon alkyl chain is a methyl group, benzene attached to a is then named using as the bromomethyl substituent, thus giving bromomethylbenzene.

Or, benzene attached to a is simply called bromobenzene.

Of course, there are other benzene derivatives that have their own common names, but those don't follow any real rules.

And there are others, but common names aren't predictable.

CHALLENGE: By the IUPAC names for the above 5 compounds, can you figure out what these look like?

3144 views around the world