Move the decimal to the left until it is after the first digit, which is 4, to get . This is called the coefficient, which is always a number with one non-zero digit in front of the decimal. The coefficient also contains only significant figures, which is why I left out the final zeroes. 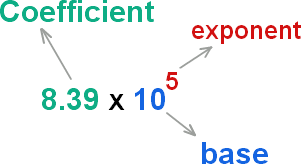 3649 views around the world