How does beta decay work?

Radioactive atoms decay through a series of radiation such as alpha, beta and gamma decay . If atoms have too many neutrons , the neutrons in the nucleus will change to protons and to conserve charge, they will emit an electron known as beta decay.

Beta decay is not very penetrative and is stopped by a few centimeters of air. From experience, a weak beta emitter is affective within a meter.

Extra notes: Electrons are not the only ones that are released during beta decay. (Anti) Neutrinos are the by products.

It is found that although charge is conserved, particle spins aren't if we chose to ignore the existence of the neutrino. Experimental data shows that the electrons carry a range of energy less than the predicted fixed amount of energy. 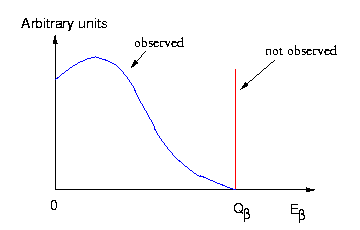 1501 views around the world