How does hybridization relate to molecular geometry?

VSEPR Theory predicts the geometry, and chemists use hybridization to explain it.

But hybridization works only for elements in the second period of the Periodic Table, and best for carbon. 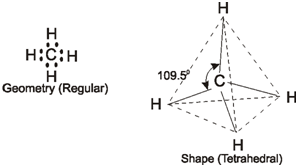 For elements in periods 3 and up, the bond angles are even further from those predicted by hybrid orbitals,

Chemists now believe that d orbitals are not involved in trigonal bipyramidal and octahedral geometries. So there is no sp³d or sp³d² hybridization.

They believe that PF₅ does not expand its octet. Instead, the molecule is a resonance hybrid of five Lewis structures.

SF₆ is a resonance hybrid of structures that have four covalent and two ionic bonds.