How does mass spectrometry relate to decomposition?

It... kind of does. But it isn't exactly "decomposition". The technical term for it is fragmentation. Decomposition, strictly speaking, generally gives more "regular" compounds, like how decomposes into and .

Mass spectrometric fragmentation, on the other hand, is bond cleavage through some sort of ionization source, like an electron beam (traditional/"classical") or an electrospray ionization (ESI) setup (more common these days), and it gives compounds that, while imaginable, normally aren't possible without such ionization technology and without being in gaseous states.

Some possible gas-phase fragmentations within a mass spectrometer may be, for example: 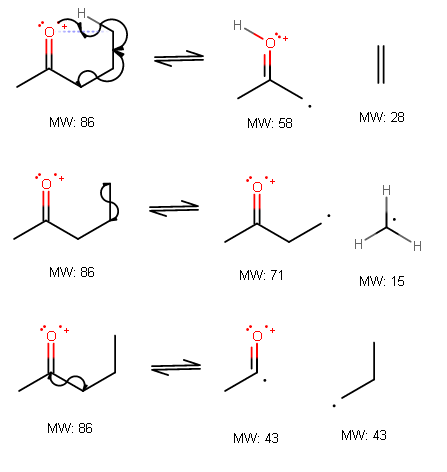 The first one is a special one called the McLafferty Rearrangement, and that only happens with aldehydes and ketones that have three carbons extending from the carbonyl carbon (the third carbon is called a -carbon).

The second one is not particularly abundant but it happens.

The third one seems to happen most abundantly, interestingly enough, though it may, in part, be because there are two different compounds with the same molecular mass.

The mass spectrum for this compound is: 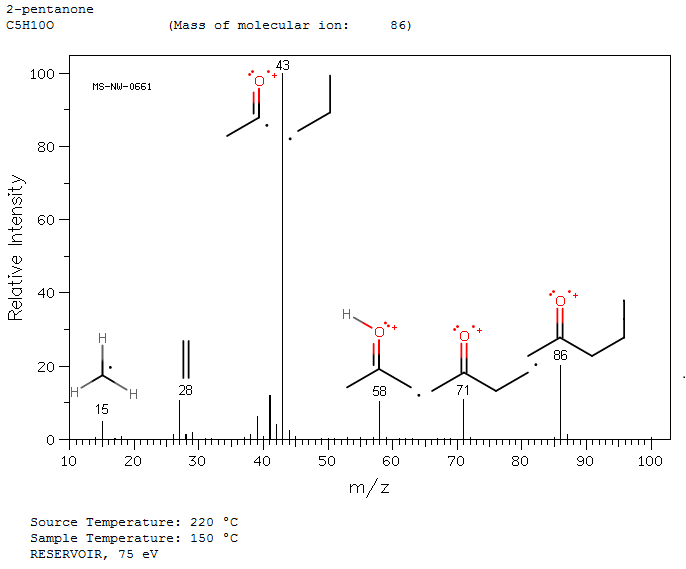 (I overlayed the relevant fragments atop the corresponding peaks.)

I've explained how a mass spectrometer works here. If you have any questions, feel free to ask more.

See all questions in Decomposition Reactions

2680 views around the world