Scoliosis is a condition in which the spine takes on a characteristic lateral 'S-shaped' deformity.

Scoliosis is a condition in which the spine takes on a characteristic deformity. It is no longer a straight column of vertebrae as it ought to be, but instead appears to conform to an 'S' shape that deviates laterally at varying degrees and locations; depending on the severity of the condition.

The skeleton gives the body its form, and muscles attach to bones via tendons; when there is deviation from the normal anatomical symmetry of skeletal structures, there will be consequences on other tissues that would usually be present in a similar bilateral symmetry.

Uncorrected, this will worsen over time as unequal amounts of force continue to be applied to the muscles forces them to adapt. If the spine is out-of-line, then it will have a knock on effect on other parts of the body, which also fall out of line; most notably the head, neck, ribs, abdomen and pelvis - because the same unequal forces are exerted on the tissues in those regions, furthermore, the patient may try to compensate for the changes, i.e. by trying to keep their head straight, despite the curvature of the spine will result in straining other muscles.

If muscles are stretched in one side, but shortened on the other side, then consider what affect that might have on structures such as nerves, organs and blood vessels that pass near to or through those muscles.

Now imagine the normal thorax (rib-cage) and the structures that reside within it; the heart and lungs. With the coils of the spring representing the ribs, when muscles pull on one side with more force than those on the other, the ribs are pulled closer together on one side, and further apart on the other. This can be seen in x-ray image below which shows thoracic scoliosis: 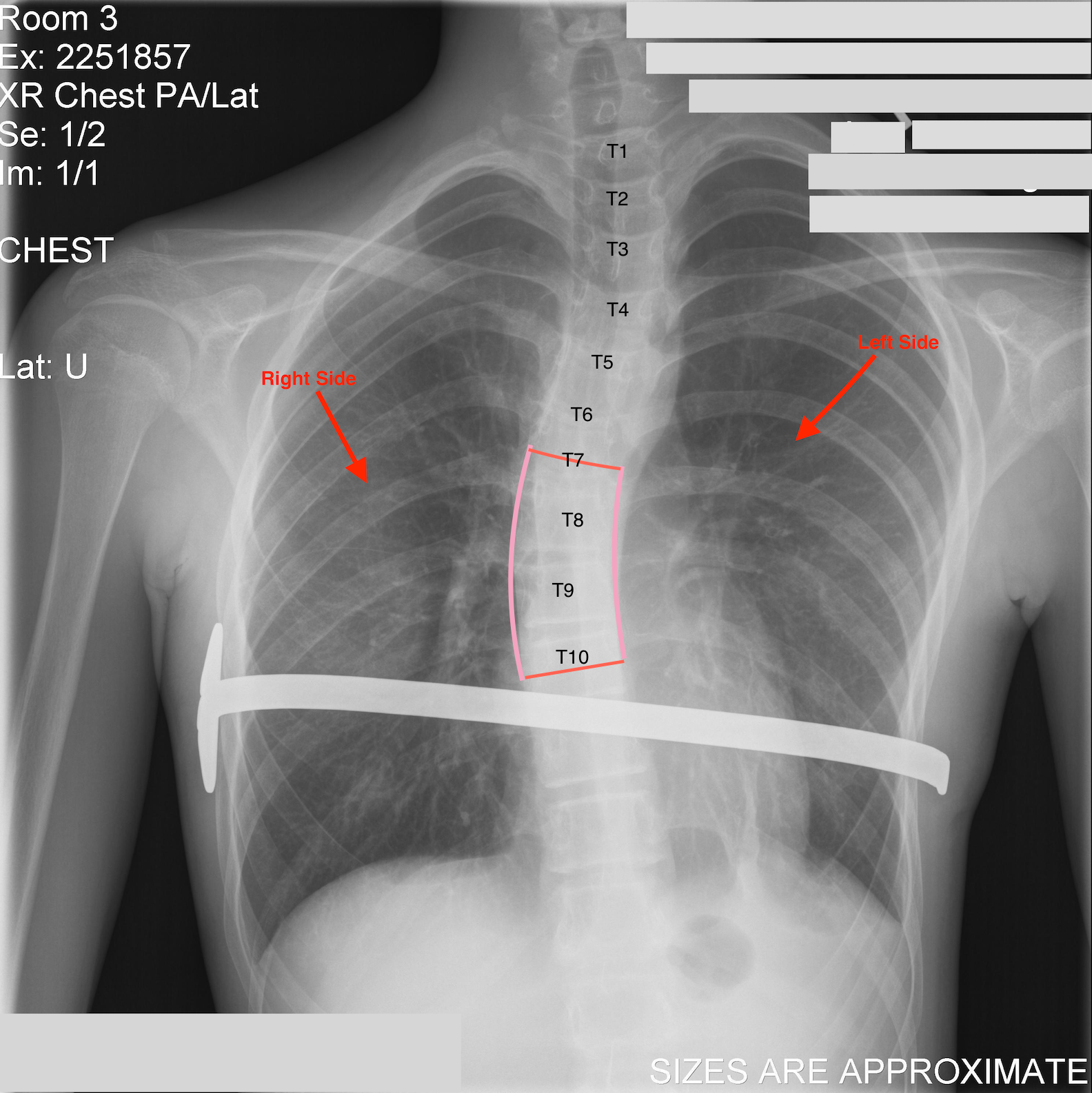 Note the difference in length of the fictional muscles attached to either side of the T7 and T10 vertebrae. The one on the right side is stretched (tighter), whereas the one on the left is shortened.

The lungs need to be able to expand equally, and when the curvature is severe enough, then the function of the right lung will be diminished, resulting in an increase in pressure. This in turn will cause an increase in the pressure experienced by the blood vessels that supply the lung, and in order to adapt, they too will increase in size. For the heart to pump blood into the right lung, it will need to work harder to cope with the increased pressure, and in time the walls of the ventricles will begin to thicken; if such a scoliosis is not corrected, then this could later cause heart failure or other complications.

3036 views around the world