How does solar energy convert the heat energy into electrical energy?

Sunlight hits the cells causing them to release electrons. This creates an electric current, which is then used as electricity.

2) Solar thermal energy uses the energy from the sun to heat a fluid to a higher temperature, that heated fluid is then transferred and heats water, which produces steam. The steam is converted to mechanical energy and produces electricity. 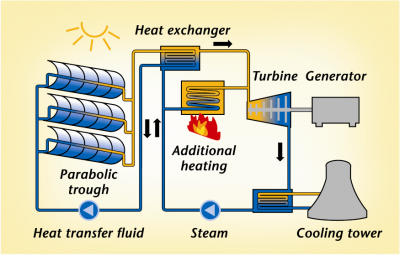 1) More specifically, when sunlight hits the photovoltaic cells, the cells absorb photons of light and release their own electrons. A charge difference built into the cells attracts the free electrons into another layer of the cell.

2) Unlike PVs, solar thermal energy generates electricity indirectly. Solar thermal energy uses the energy from the sun captured in the parabolic troughs seen above to heat a fluid. These troughs allow more sunlight to be captured. That heated fluid is then transferred and heats water, which produces steam.

Note: Sometimes fossil fuel is used in the process, if enough energy cannot be generated using the heated fluid alone. Often, these solar thermal energy plants use a combination of solar and fossil fuels to produce electricity.

Other method is use huge mirrors which concentrate light on wate r tubes.Steam is produced and this is use to drive a turbine which drives a generator.![enter image source here]
Picture credit.Science