How does standard deviation related to the general concept of risk?

We know that in financial markets value of marketable assets are not constant and they may go up or down. While some assets like stocks may show greater variation, other stocks say like treassury bills do not show that much variation.

Standard deviation is a measure of volatility of markets. The question now that how it is linked to the concept of risk.

Let us consider the average return on a marketable asset as , say during last weeks and its standard deviation, say .

We have described this for an asset in figure below. Average return on asset is , however, as seen from the figure there is also a risk of asset loosing its value (as also possibility of much better than expected returns i.e. average returns). 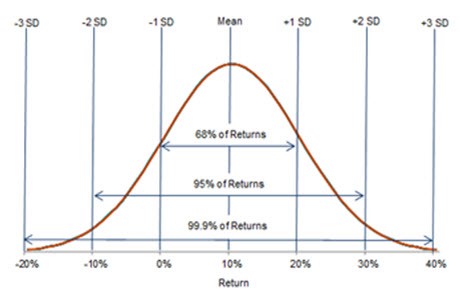 This helps us in measuring likelihood of loss in the value of an asset, which is known as risk and we use statistical measure of which standard deviation forms an important tool. There are a large number of assets return on which may not be normally distributed, but risk managers have modified tools for them too.

However, an important thing to note is that such a statistical analysis is based on past prices of the asset and future prices of assets may not be determined by past data. Hence, such measures are to be used with caution and perfect understanding of the statistical principles behind the analysis.

2963 views around the world