Huh, I can't think of more than one good path. There are others, but they won't give as good of a yield because the alkyl halide is a secondary alkyl halide, which is not great for , ruling that out in the first step for the best possible synthesis.

Here's what I came up with: 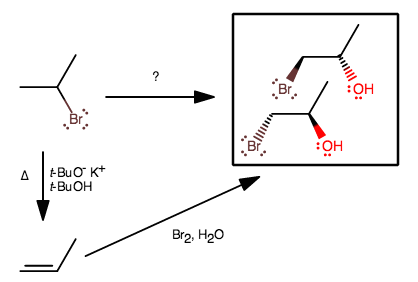 The first step is a second order elimination () via a strong bulky base like tert-butoxide in tert-butanol. (Tert-butoxide is also known as 2-methyl-propan-2-ol.) Bromine is the leaving group here, and tert-butoxide steals a proton off of carbon-1.

The second step is not one you would normally think you need to use (it might have been introduced as a reaction you want to try to avoid happening when brominating), but it works here.

Bromine adds across the double bond first as a cyclopropane analog, and then water, as a stronger nucleophile, intercepts before the other bromine attacks.

Water targets the carbon where the resultant carbocation is more stable, so it targets carbon-2. The result is a product of Markovnikov anti addition (as opposed to syn addition).

See all questions in Halogenation

2853 views around the world