If two oil drops can be held motionless in a Millikan oil-drop experiment, would the ratios of what two properties of the drops have to be equal?

The charge-to-mass ratios of the two drops would have to be equal. 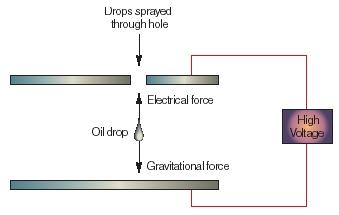 Millikan used charged plates so that the upward electrical force on a drop just balanced the downward gravitational force.

Suppose that a drop with two electrical charges and a given mass was just held motionless between the two plates.

Another drop with twice the mass would need to have four electrical charges to stay in place.

The second drop would have twice the charge and twice the mass as the first drop.

But the ratio of the charge to the mass would be the same for each drop.

1632 views around the world