Is Oleic acid organic or inorganic? Polar or nonpolar? Covalent or Ionic?

Oleic acid is only composed of C/H/O - and is Organic.

Polar or Nonpolar is a bit tough. For big molecules like this, it is easier to think in terms of "liking water" or "hating water" (hydrophillic or hydrophobic). Oleic acid is hydrophobic, and would be considered Nonpolar. However, Oleic Acid (like most fatty acids) contains 2 sections. One section is a long C-H chain that is entirely nonpolar. The other section is a COOH carboxylic acid group, which is polar.

As for covalent or Ionic, Oleic acid is entirely comprised of covalent bonds. However, the COOH carboxylic acid group can become deprotonated and take on the form, which is anionic. But the molecule, even in its ionic form, is still entirely put together with covalent bonds.

Oleic acid has a chemical formula of .

First, let's have a look at its structure: 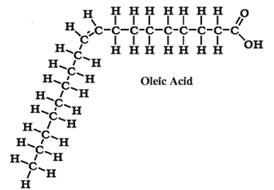 As you can see here, there are a lot of carbon-hydrogen bonds, and so this compound is organic.

It is kind of hard to figure out from here if the molecular is polar or not. In a sense, the carboxyl group is very much polar, but the rest bonds have little to no electronegativity, and they themselves would be considered non-polar. So, we cannot really determine if the molecule is altogether polar or not, but divided into sections, which are polar and non-polar.

To see if this is a covalent or ionic compound, let's have a look at its chemical formula. Oleic acid is only made up of carbon, hydrogen, and oxygen, which are all non-metals. Therefore, it'll be hard for them to be ionic compounds, however they are exceptions, such as , which is an ionic molecule without any metals.

Also, carbon does not easily form ionic compounds, and it'll be safe to say that oleic acid is a covalent molecule.