Name the following complex. Make certain your answer identifies the correct structural or geometric isomer (do not worry about optical isomerism for this question)? 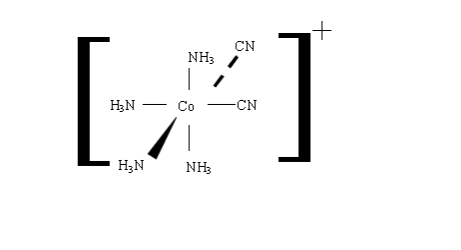 The name of the ion is cis-tetraamminedicyanocobalt(III).

The ligands are named "ammine" and "cyano".

The two cyano groups are at 90° to each other, so they are cis.

If they had been at 180° from each other the ion would have been *trans.

The cyanide ions originally had a charge of -1, and the complex ion has a charge of +1, so the oxidation number of the cobalt atom must be +3.

See all questions in Isomerisms

678 views around the world