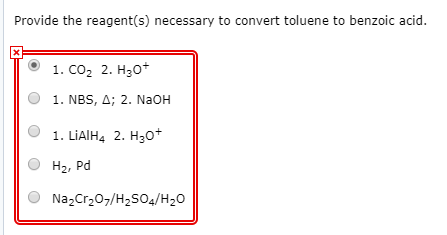 This is an oxidation reaction. Adding oxygen means oxidation, adding hydrogen would be a reduction reaction. If you look at the structure of toluene below on the left and benzoic acid on the right, you can see that we need to add in two oxygen atoms. 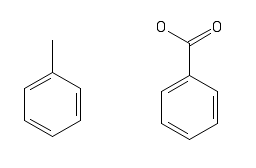 and are sources of hydrogen so they are not going to add any oxygen. NBS is a source of bromine so it won't help.

So you need an oxidant, something with a source of oxygen. The can be used to carboxylate certain things, it acts as an electrophile, so you would need a nucleophile (such as the pi electrons in benzene) to attack it. This would lead to a substituted toluene but would not replace the methyl group.

An interesting thing to note is that toluene is not miscible in water. But it is slightly soluble and possibly more soluble in acidic solution.

We could write separate redox reactions....

Dichromate is reduced to ...

And toluene is oxidized to benzoic acid...

And we add the equation together to eliminate the electrons...

So we use the acidified sodium dichromate...and we observe a change in colour from the orange-red of dichromate to the green chromic ion...

779 views around the world