Verify that the Euler's formula is correct?

I have taken that you really did mean "verify" which implies that there should have been a sample to verify. It is also possible that you really meant "prove"; if so re-submit this question with proper terminology.

I have also assumed that, since this was asked under the Geometry topic, you meant Euler's Formula relating Vertices, Edges, and Faces for planar figures in Euclidean space (Euler has several formulae in different areas).

Here is a sample for verification: 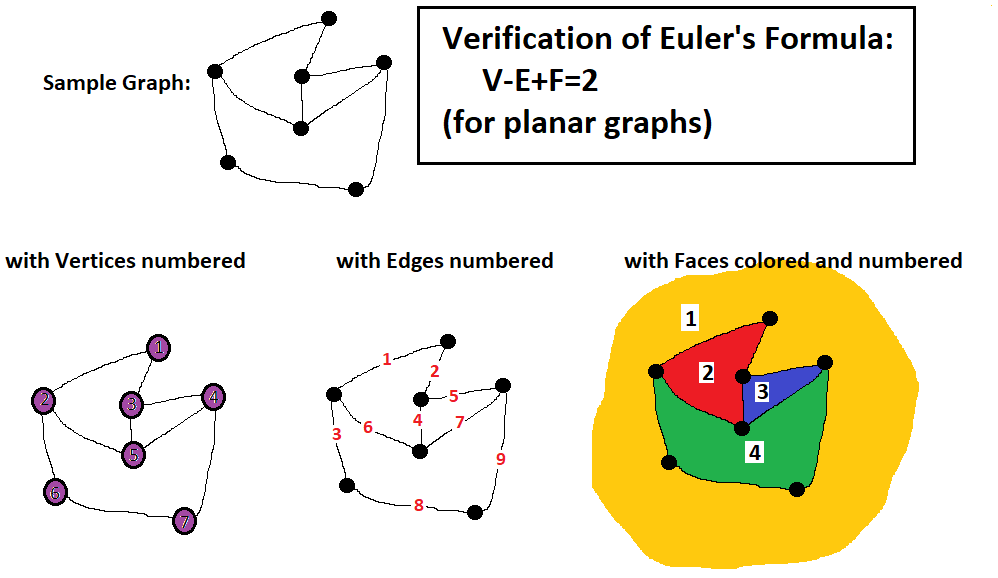 As we can see this figure (or "graph") has:
Vertices;
Edges; and
Faces.

and for the sample (above) since

we have verified Euler's Formula (for this example).

Proof by induction below:
(it is long, but not very complicated)

Before we can prove Euler's Formula for Planar Graphs it is necessary to clarify the environment. For the purpose of this discussion, a Planar Graph:

Is composed of three types of elements:

Based on the above:

A minimal planar graph will contain 1 vertex, 1 edge (with both ends connected to the vertex), and 2 faces: one inside the loop created by the edge looping back to the vertex and one outside that loop.

Let us suppose that Euler's Formula is true for
, and
, and

Option 1: Adding a Vertex
Consider generation of a planar graph with vertices from some planar graph that satisfies Euler's Formula.

We know that prior to adding the vertex, the prior graph must satisfy Euler's formula.

Option 2: Adding an Edge Without Adding a Vertex
Again there are two possibilities:
- Both end of the new edge are connected to the same vertex. In this case we have a loop which encloses a new face within an existing face. Adding a new edge in this way increases by but it also increases by so Euler's Formula remains valid.

Note: there is no Option 3: Adding a Face Without Adding a Vertex or Edge.

3795 views around the world