Was the New Deal a success?

I would say yes, but different people would have different opinions.

Like most things, this is up for discussion but it is evident that FDR did succeed in reducing unemployment . In 1937, unemployment had sunk from 14 million to 8 million - however, in 1938 it rose back to 10 million when government spending decreased. This rise didn't get any better until WW2 provided many new jobs. Therefore, you could argue that he didn't actually help unemployment. 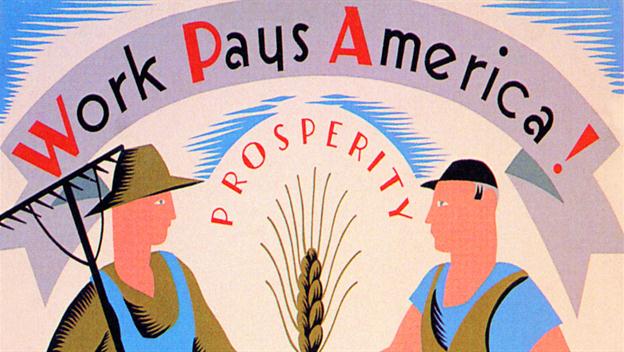 The many schemes offered jobs and financial support for millions of people who had been badly affected, and the government didn't just give them money. FDR helped his citizens earn money through public works so the workers got a pay check and the country benefited from many new bridges, schools roads and more!

FDR also helped to restore confidence in the Banks and government . Americans felt supported by the government and FDR won many supporters for the Democratic party - especially Women and African Americans who benefited from the labour support.

Talking of labour support, The New Deal introduced lots of regulations to help workers, such as the National Labour Relations Act of 1935 which helped workers to form unions and protected the members from other laws as well as forcing businesses to listen to the unions and their workers (e.g. by setting up boards to hear union complaints).
The Fair Labour Standards Act of 1938 cut the maximum hours someone could work for, ended " oppressive child labour " and raised minimum wage. This protected many people but also increased prejudice. Once they were required to pay a higher wage, many Americans decided to only employ white people, leading to a higher unemployment rate for African Americans.

FDR's scheme also relied upon a greatly increased government expenditure , as they paid citizens to do public work projects. This resulted in going over budget and many people criticized the New Deal for being the most expensive governmental project - even stating that it wasted money in some areas.

If you are asked whether it was a success in an exam, then just give a balanced argument with well explained and proven points for both sides. Conclude your answer by stating what you think and backing it up with evidence.

I hope this helps; let me know if I can do anything else, or send me a message if you want to talk some more about it:)

Areas of this answer were taken from a previous answer that I wrote myself. To learn more about what the New Deal actually entailed, click here .

6219 views around the world