What are nuclear fusion reactions?

Isotopes of hydrogen are mostly used in these types of reactions.

Deuterium and Tritium are those two isotopes which perform the Nuclear Fusion reaction.

When they fuse together ( high energy is required to fuse them i.e. High pressure minimum of 10^6 pascal and temperature of about 10,000 degree C )

They release huge amount of energy which is equivalent to the energy produced by 1000 KJ of coal burning together.

They recombine to form an helium atom and a fast moving neutron.
There is also reaming of an extra mass which is represented by Einstein's equation,
E=mc^2

Here is the diagram to show this process, 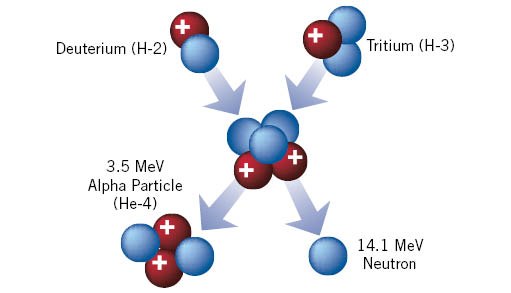 The most common nuclear fusion reaction takes place in the stars.
Here is how it takes place:-

The center of the stars has huge amount of chemical activities taking place inside them.

This reaction involves the fusion of many nuclei which on fusing make a larger nuclei. This particularly releases energy which is responsible for fueling the stars.

See all questions in Nuclear Fusion

7507 views around the world