What are some common mistakes students make with pi bonds?

Here are some of the mistakes I can think of when dealing with pi bonds:

Pi bonds are weaker than sigma bonds becasue of the difference in how the orbitals overlap when forming the bonds: head-on for sigma bonds and side-on for pi bonds.

More on this here: http://socratic.org/questions/why-are-pi-bonds-weaker-than-sigma-bonds

The difference between a sigma and a pi bond lies in the orientation of the orbitals that come together, i.e. whether or not they overlap head-on or side-on. Some examples of sigma bonds: 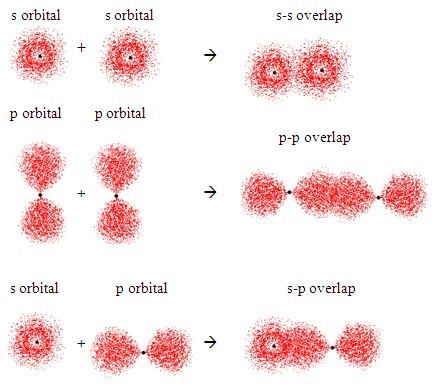 Two p-orbitals form a pi bond when they overlap side-on (are parallel to each other), like this:

Pi bonds only come in combination with sigma bonds, you can't have two atoms bonded solely by a pi bond. The pi bond present in a double bond strenghtens the bonds between the atoms by adding to the sigma bond. The same can be said for the two pi bonds present in a triple bond.

Always remember that a pi bond, which of course includes the above and below planes, can hold no more than 2 electrons.

SImply put, no they do not. Pi bonds inhibit free rotation in molecules because of their specific overlap.

1594 views around the world