What are the blunt ends in a DNA called when it is cut by a restriction enzyme?

Most RE's cut the double helix at palindromic sites, leaving an "Overhang" in the ends of the helix. This is known as "Sticky Ends".

Hydrogen Bonds will eventually let two Sticky Ends pull towards each other again, enablig DNA Ligase to "glue" them back together again. These need not be, and often aren't, the same molecules.

As far as I know there is no alternative name for Blunt Ends, at least I have never heard any...

There's a third type: "Frayed Ends".
In Frayed Ends the last few bases are not complementary: 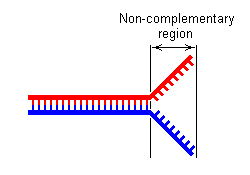 This can also occur within the double helix itself, resulting in a bulge, by the way, but this is usually repaired by the cell's machinery. It also is a mechanism for Evolution to introduce Mutations....

2693 views around the world