What are the main intermolecular forces found in a liquid sample of #CBr_4#?

The three main types of intermolecular forces occurring in a molecule are usually described as dispersion forces, dipole-dipole forces, and hydrogen bonding. We can examine which of these forces apply to tetrabromomethane (carbon tetrabromide).

Going down the list from weakest to strongest (generally) forces, we know firstly that has dispersion forces, which are possessed by all molecules.

In a non-polar compound, electron density it distributed equally on average. Electrons are always moving, and sometimes they occupy similar locations by chance. The result is a temporary dipole moment, which exists for only a very brief period of time. However, this is occurring all over the molecule at every point in time. Of course, polar compounds have permanent dipole moments as well, and so all compounds possess at least these weak interactions.

Next, we might be tempted to say that also has dipole-dipole forces, but we have to consider the shape of the molecule. Tetrabromomethane has a tetrahedral geometry, and so each dipole created between C and Br is canceled in a manner of speaking. You can think of it as because they are all pulling in such a way that there is no net "force" on the carbon atom where the dipoles are concerned. Think tug of war. If you and I both pull on opposite sides of a rope with the same force, the rope doesn't move more in either direction, toward you or me, but remains stationary in a state of static equilibrium. 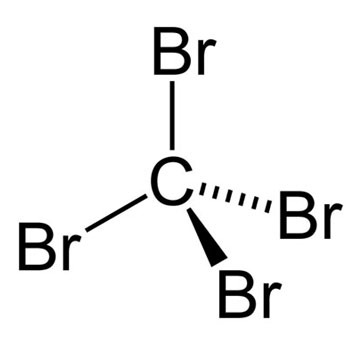 Therefore, this compound does not have dipole-dipole forces.